1069 rue Mackay was a greystone two-story built just before 1900. It had a continuous history of boarders from its beginning until the building was abandoned in October 1985. The residents were relocated to adjacent rooming houses and lived in fear of further evictions.

In the summer of 1986, permission was given by the property manager to organize an art exhibition in the abandoned building. The exhibition would serve several functions: it would give the building a positive character in the minds of the local residents; it would bring public attention to an ongoing and increasing housing crisis within the city; people would see an example of historically important architecture that would soon be lost forever; and lastly, the exhibition would serve to create a feeling of unity among local low-income tenants, the artists, and other interested individuals or groups in the city at large.

Fourteen artists (eight women and six men) from a wide diversity of cultural backgrounds, agreed to participate in the exhibition. Each had a separate room to work in, thereby reinforcing the idea of “rooming in.” To keep the feel of the house, and to emphasize the individuality of the artists and, by extension, that of the former roomers the halls remained as they were found. The artists were free to work within personal aesthetics and pursue independent art interests. Each was sensitive to the house and the social issues involved. The exhibition was funded by the participating artists.

Click here for information on the history of Overdale. 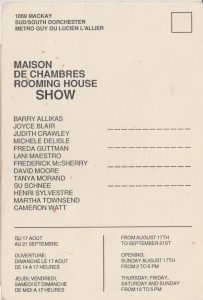 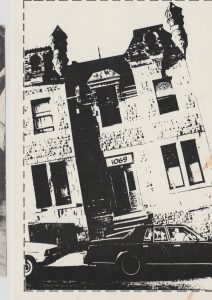 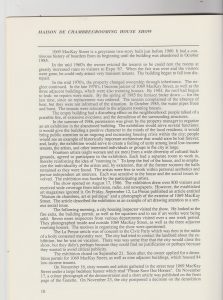