In the early 80s, the military base at Goose Bay, near the Innu village of Sheshatshit, began to be used by British, Dutch, and West German planes to train pilots in low-level flying. The training involved flying planes over Innu land as low as 30 metres from the ground; in 1992, there were almost 8,000 such flights in the flying season which runs from April to November. The flights produce ear-shattering noises which cause an uncontrollable ‘startle reaction’ and have serious health effects in the long term; they have also been observed to cause psychological trauma in young children. There is good reason to believe that the low-level flying is also destroying the environment, weakening the caribou, polluting the sky and the lakes. But most seriously, the flights are taking place over the traditional hunting grounds of the Sheshatshit Innu, and discouraging many from making the trip “into the country.” The Sheshatshit IMU, like some other communities, still

Over and over, in 1988,1989,1990, groups led by women and children would enter CFB Goose Bay. Over and over the women would refuse to sign release conditions promising that they would not walkon their own land, and be sent to prison. In March of 1989, nine women in jail in Happy Valley (near Goose Bay) released a statement to the press: “All nine women have been overnight in a small drunk tank.. . We have four women with us with health problems and one woman who is four months pregnant. We leave at home 49 children. Considering all of this it is very difficult and painful. There is no reason for us to be in jail. We don’t consider it a crime to fight and to protect our culture and land.. . You won’t see us as we once were, sitting back and watching developments take place on our land. We will be very outspoken, active in fighting for our land.” 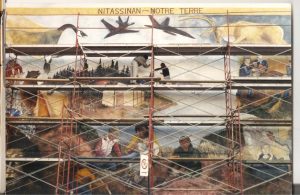